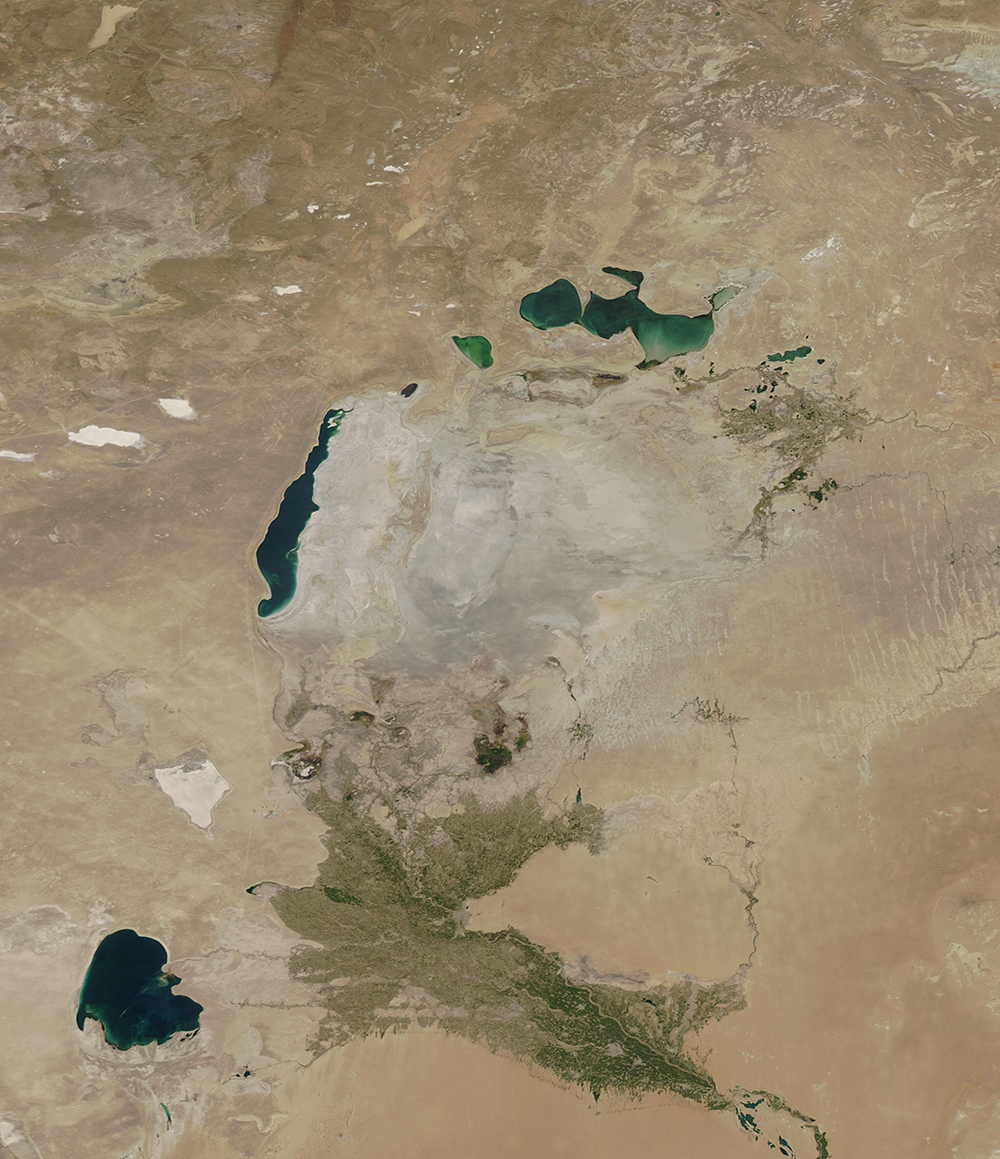 Due to global climatic phenomena, the influence of dry and low water period, there is a further regression of the Aral Sea water bodies, which determines the increase in the concentration of fine salt during salt-dust storms.

Billions of tons of poisonous salts have accumulated in the Aral Sea, which got there with water after the washing of fields. According to experts’ estimates, there are about 107-114 billion tons of salt on the dried bottom of the Aral Sea. This circumstance, as well as the death of almost all spawning grounds, led to a catastrophic reduction of the fish population, which numbered about 200 species. This has dealt a crushing blow to the local fishing industry, which once employed about 60,000 people.

Every year winds blow up to 80 million tons of toxic salts from the dried bottom of the Aral Sea. They are carried by dust storms for many thousands of kilometers – from Western Europe to the peaks of the Tien Shan and the Himalayas, having a negative impact on the health of people and ecosystems of all our countries. Hundreds of thousands of people breathe poisonous air. Salt dust covers high mountain glaciers with an impermeable film, which give birth to many rivers. This adversely affects the quality of water, which eventually ends up in water pipes and wells, located even thousands of kilometers away from the source, not to mention the residents of coastal areas, who often have diseases of the eyes, lungs, digestion and urinary tract, blood and blood forming organs, etc.

At present, there is still a picture of extensive natural resource management. For example, to obtain high yields of cotton, rice and other crops, large amounts of mineral fertilizers and pesticides are applied to the soil, some of which do not even decompose in nature, and therefore pose an even greater danger to humans. All this complex of pesticides and herbicides, from the fields with the water gets into the Syrdarya, and thus into the Aral Sea, seeping into the ground and groundwater, which are used for drinking and household needs. This issue is particularly relevant for the Kyzylorda region, located in the lowest part of the Syrdarya, and therefore most of all felt the impact of this factor.

The main factor limiting the species diversity and resource importance of plant complexes is the pollution of water and soil by various pollutants (pesticides, herbicides, etc.).

Violation of the qualitative composition of soils and water proportionally increases the consumption of irrigation water, significantly exceeding the scientifically based standards. According to forecasts, if the current trend of salinization of water bodies and soils continues, most of the agricultural land in the Syrdarya River basin (the situation is probably similar in the Amudarya River basin) will become unsuitable for irrigated agriculture within a few decades. The level of salt pollution in the rivers will also be unsuitable for drinking water supply. This type of river pollution can cause irreparable damage to the environmental and socio-economic development of Kyzylorda oblast.

According to the Unified system of water quality classification in water bodies of the Republic of Kazakhstan the Syrdarya River belongs to class IV: – Kokbulak village site (10.5 km north-west (hereinafter NW) of the post): water quality refers to class 4: suspended solids – 125.62 mg/dm3, magnesium – 42.79 mg/dm3, sulfates – 510.25 mg/dm3, phenols – 0.0015 mg/dm3. Concentrations of magnesium and phenols do not exceed the background class, Concentrations of sulfates and suspended solids exceed the background class.

FAO specialists carried out work on soil salinity mapping in Kyzylorda province in 2021. According to the data, almost 85% (20.3 million hectares) of the total area of agricultural land (22.6 million hectares) is currently salinized in the region. This situation requires immediate action to apply new technologies to regulate the rate and degree of salinization of the territory. Inefficient farming causes soil erosion, salt pollution, overgrazing, and increasing desertification. Pastures account for 46.7% of the oblast’s territory. At present more than 80% of pastures are degraded mainly because of soil salinization, groundwater mineralization and irrational use of natural resources.

At present, great efforts are aimed at combating salt and dust transfer, at fixing the moving sands, at localizing the negative impact of this phenomenon on the environment. In order to fix the sands on the exposed seabed, several thousand hectares of saxaul and other unpretentious plants, which easily tolerate the conditions of semi-desert and desert climate, are annually planted here. As a result, forest massifs today in the Kazakh part of the dried Aral Sea bed (DASB) are created on almost 337 thousand hectares, including at the expense of self-reproduction.

At the same time, it is necessary to regulate water regime in shallow channels of the Large Aral Sea with the area of about 2 thousand km2 , because under high water content saxaul dies and more moisture-loving plants, for example tamarix, start germinating. In subsequent, dry years, tamarix dies and saxaul dies earlier. Therefore, it is necessary to provide for water regulation on the shallow channels of the dried bed of the Aral Sea, to consider opportunities for groundwater exploitation using abandoned wells and the development of new groundwater wells.

Given that natural ecosystems do not have administrative and state borders, it should be argued that the environmental problems of the Kazakh part of the Aral Sea region are identical to those of the Republic of Karakalpakstan and Dashoguz velayat of Turkmenistan.