ASTANA – Kazakh government officials and representatives of the United Nations Development Programme (UNDP) discussed mitigating the effects of the shrinking Aral Sea during a Feb. 19 symposium in Astana. 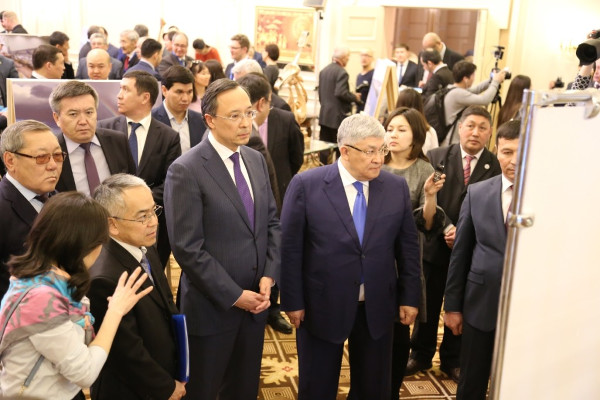 Over the past 40-45 years, the level of the sea has declined 22 metres, the water volume has decreased tenfold and the salinity has reached 80 grammes per litre, said Kyzylorda region Akim (Governor) Krymbek Kusherbayev in opening remarks.

People inhabiting the region started emigrating due to a crisis in the fishing industry and health deterioration. The salty dust from the dried lands spreads all over the continent from the Tien Shan mountains in the East to Scandinavia in the West. Formerly the fourth largest body of inland water, the Aral Sea has shrunk to ten percent of its original size, splitting into the North Aral Sea and South Aral Sea.

“Despite the difficult economic situation in the country during the first years of independence and in the subsequent crisis years, President Nursultan Nazarbayev has been paying much attention to this issue. Measures were taken to mitigate the impact of the drying sea on the situation in the region, to solve the problems and to develop the territory around the Kazakh part of the Aral Sea… Over 70 international projects worth $6 million have been implemented to revive the region,” said Kusherbayev.

He reported the economic situation in the region is improving. To date, there are eight fish processing plants in the Aral Sea region, four of which have been built during the years of independence. The volume of fish catch has doubled in five years, volume of exports grew nine fold. Over the past five years, more than 1.3 trillion tenge (US$4 billion) of direct investment was attracted into the region.

The construction of the Kokaral Dam, which separated the two remaining parts of the sea, in 2006 brought results that exceeded expectations. By March this year, the level of the North Aral Sea will rise and stabilise at around 40 km above sea level. The salinity of the North Aral Sea began to decline and constitutes 18 grammes per litre. Today, 23 species of fish live in the saved part of the sea, where virtually all the fish had previously died.

Kazakh Foreign Minister Kairat Abdrakhmanov, who also spoke at the symposium, stressed the Aral Sea disaster was a result of humankind’s thoughtless approach to the environment and use of natural resources. He said the countries of the region need more concerted efforts to overcome the consequences of the desiccation of the Aral Sea.

“At the moment, the countries of Central Asia are at the beginning of their cooperation efforts aimed at mitigating the negative impacts of climate change and increasing the welfare of a growing regional population. The countries of the region are also developing a new mutually beneficial system of trans-boundary water use and protection and are creating a monitoring and controlling mechanism focused on maintaining water resource quality,” he said.

Having noted that Kazakhstan is party to many water management related treaties and conventions, he reminded that the eighth session of the meeting of the parties to the Helsinki Convention is to take place in Astana in October 2018, which will be the first time the event is held out of Europe.

Abdrakhmanov also highlighted that Kazakhstan welcomes the results of the International Fund for Saving the Aral Sea (IFAS) Executive board’s session held Jan. 30 in Ashgabat, Turkmenistan, and is ready to participate in the development of the Aral Sea Basin Programme (ASBP-4), along with other solutions to the Aral Sea basin issue.

According to the Kazakh Vice-Minister of National Economy Baurzhan Bekeshev, there is hope that the Aral Sea will be revived thanks to projects implemented by the Kazakh government with the assistance of international organisations, such as the UNDP, the Organisation for Security and Cooperation in Europe (OSCE), the World Bank and the Asian Development Bank, among others.

“The Aral Sea issue is still very far from being resolved. But the sea is being revived, it’s filling with water. On top of its status of the first sea destroyed by humankind, the Aral is close to attaining a new one – the first sea revived by that same humankind,” he said.

UN Permanent Coordinator and UNDP Resident Representative in Kazakhstan Norimasa Shimomura said Kazakhstan has made progress in combating the negative consequences of the desiccation of the Aral Sea.

“The most important task at present is to reduce the destructive impact of the Aral Sea crisis on the environment and livelihoods of millions of people still living in the vicinity of the Aral Sea area. In order to promote this approach, UNDP jointly with Mr. Kusherbayev’s team has designed a project that employs a mix of economic, social and environmental measures with the purpose of promoting sustainable human development of the local communities in the Aral Sea region,” he stated.

The symposium also included the showing of the film “Hello from Aral to Astana” and an exposition of Aral Sea products, including local fish and Aral table salt.

What happened in the Kyzylorda region in 2017?

In all sectors of the economy, positive growth dynamics has been achieved, while for a number of indicators of the region it holds leading positions in the country.

In 2017, the region commissioned about 600 thousand square meters of housing. So, in the regional center construction of 61 multi-storey houses was conducted, including 24 houses for 957 apartments at the expense of private investors and 37 houses for 2014 apartments within the framework of state housing programs.

In 2017, the region completely closed the issue of homes and schools in poor condition.

In addition, the construction of the first facilities of the new city on the left bank of the Syrdarya in Kyzylorda was started: 18 multi-storey residential buildings, a kindergarten for 320 students and a student campus at the Bolashak University.

This year the gasification of Baikonur has begun, the suburban Belkol settlement has been fully gasified, so 64% of the region’s population have the opportunity to consume natural gas.

An excellent result was shown by the rice ponds of the Aral Sea area, which gathered a record harvest – over 500 thousand tons of grain. At the same time, the crop growth was achieved due to an increase in cultivated areas, as well as successful breeding and selection of germination varieties.

In the outgoing year, agricultural producers of the region entered foreign markets. Established close cooperation with the Islamic Republic of Iran for the cultivation, milling and export of rice. It is to remind that in 2016 in the region a trial lot of the Iranian variety “Torem Hoshemi” has been seeded. And in November of this year within the framework of the Baikonur Invest investment forum an agreement on the supply of Kyzylorda rice to the Islamic Republic of Iran was signed.

In general, in 2017, exports of agricultural products increased by 42 percent, including the export of rice by 45 percent.

There are also gratifying achievements in the field of education. Thus, 97 percent of graduates of schools this year entered universities and colleges. Thanks to productive cooperation with technical universities in Russia, 452 graduates of Kyzylorda schools are currently taught at leading technical universities in Moscow and St. Petersburg. Lets note that the Kyzylorda region is the only one that organized the training of its graduates at the expense of grants of the Government of the Russian Federation.

In addition, starting next year, Moscow State University named after M.V. Lomonosov will allocate 20 grants for training in magistracy in the specialties “Cybersecurity” and “Mathematical modeling of processes.”

Within the framework of the ХІV Kazakhstan-Russia international interregional cooperation in Chelyabinsk with the participation of the Presidents of Russia and Kazakhstan solves another important issue for the Kyzylorda region: about 12,000 hectares of land were withdrawn from the lease of the Russian Federation and transferred to Kazakhstan for the development of small and medium-sized businesses.

This was the outgoing year for the Aral Sea area.