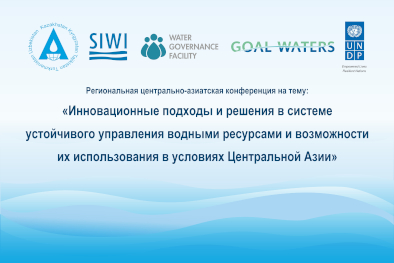 Background: The Aral Sea crisis puts the health and well-being of more than 70 million people in Central Asian countries at risk. This crisis is negatively affecting sustainable development of the region due to environmental, socio-economic and humanitarian consequences threatening the health, gene pool fund, and future generation of the region.

Prior to 1960s, the Aral Sea, was the fourth largest inland lake in the world with an area of 68,000 sq. km and water volume of 1083 cubic km. The annual fish crop in the Aral Sea was 30-35 thousand tons. Both the sea and the rivers that flowed into it (Amudarya and Syrdarya) had a high ecological and economic value. Over 80% of the population, inhabiting the coast of the Aral Sea, was involved in the production, processing and transportation of fish and fish products. The Sea hosted 38 species of fish. The region’s flora and fauna comprised species indicated in the Red Book.

Following the drying up of the Aral Sea and the reduced flow of water in the lower reaches of the river, local livelihoods have become increasingly threatened and multiple interconnected human security challenges emerged. Currently, the Aral Sea region (Karakalpakstan of the Republic of Uzbekistan, Kyzylorda and Aktobe regions of Kazakhstan) remains the most vulnerable and deprived region of Kazakhstan and Uzbekistan. Karakalpakstan occupies 37% of the total territory of Uzbekistan, has 5.5% of its total population, but 2.5% of total GDP of the country. Kyzylorda and Aktobe regions of Kazakhstan occupy 19.3 % of the total area of the country. The climate is naturally arid, therefore the local population has long depended on the water from the Amudarya and Syrdarya delta for irrigating its agriculture, and in the past – on the Aral Sea for fishing activities.

A new salt desert on the area of nearly 6 million hectares has emerged on the exposed part of the Aral Sea. While, the 2.8 million hectares are located on the territory of Kazakhstan and 3.2 million hectares of desert are located in the territory of Uzbekistan. Dust storms rage on it over 90 days a year. Low precipitation (100–150 millimetres annually), high summer temperatures of 40°C and low winter temperatures of down to −23°C trigger frequent dust storms which now blow up to 100 million tons of salt and toxic chemicals from the former seabed to the atmosphere annually.

Relevance of the topic: Both Kazakhstan and Uzbekistan, having higher number of populations in the area of the dried Sea bed, have been comparatively more exposed to the negative consequences of the Aral Sea crisis. The loss of fishery industry further exacerbated by ever-degrading land resources have seriously affected the economic livelihoods of people in both countries. People who could move out of those areas, especially skilled professionals did so at the onset of the crisis, thus resulting in further depletion of local capacities. The current working age men, including growing number of youths are engaged in seasonal labor migration, leaving the burden of looking after elderly and children on women, who in addition to their family work often have to find income opportunities.

As a result, around 44% of the populations in both countries are poor as compared to 13.8% country average poverty rate. The survey conducted by the Institute for Social Research (2017) in the Aral Sea region shows that local population largely depends on agriculture and remittances sent by labor migrants from among family members who work mostly in the outside of their respective regions. These sources of income are highly insecure, susceptible to fluctuations and insecure in terms of benefits and long term sustainability.

High poverty level, malnutrition, exposure to dust storms, deteriorating quality of drinking water negatively impacted health of local population, resulting in high rates of morbidity and mortality. The incidence of anemia among children in both bordering countries is 30% higher, hematological diseases (leukemia, coagulopathy, etc.) 2.5 times higher, and asthma is 2 times higher than respective national averages. According to official data, tuberculosis incidence in the direct transboundary regions is twice, whereas in most affected districts, the incidence is four times higher.

The environmental situation in the Aral Sea regions also remains extremely alarming and is accompanied by a deterioration in the basic indicators of public health, increased mortality and a decrease in life expectancy. The Aral Sea continues to be the epicenter of an environmental catastrophe with devastating environmental, social and economic consequences for the population.

The decrease of the sea surface has led to increase of the continental climate, a decrease of the air humidity by 20-30%. Atmospheric temperature in the Aral Sea region rose to 50C. Groundwater salinity reached 150-170 mg/l. Dusty days became more frequent in the Muynak area – up to 60% per year.

The main factors of loss of the resource potential of the Aral Sea region are exceeding the norms of maximum permissible concentrations of pollutants in the environment (atmosphere, water, soil) in the size that threaten the life of the population. The content of nitrogen dioxide in the air in the Kyzylorda region, according to the Kyzylorda branch “Kazhydromet” exceeded the MPC by 1.3 times. More than 70% of the dried sea bottom is saline. Salt and dust removed from the dried bottom of the Aral Sea are dangerous for the health of the local population.

Incidence of blood and blood-forming organs in Kyzylorda oblast is exceeding the Republican indicators for 4 times, and on the incidence of nervous system the national average is exceeded for 1,5 times. The population of the Aral Sea region often suffer with the upper respiratory tract and ENT organs (51.2%), which is naturally associated with the environment and pollution of the Aral air basin. The level of infant mortality in arid regions reaches the maximum values and exceeds the national indicators by 2 times. All this has led to a decrease in the life expectancy of the population of the Aral Sea region. The highest rates of the overall mortality rate are observed in the Aral, Kazalinsk and Zhalagash districts.

The issue of effective water resources management in Central Asia is particularly acute. Water resources in this region determine different aspects of national and regional security, they are used by all sectors of the region’s economy. Irrigated agriculture remains the main water consumer in the region, accounting for about 1/3 of the gross domestic product and providing employment for more than 2/3 of the region’s population. More than 90% of the available resources in the Aral Sea basin are used for irrigation. The special role of water in Central Asia’s energy security should be noted. The share of hydroelectricity in the structure of the region’s generating capacity is 27.3% of the total electricity consumed by the region. In Tajikistan and Kyrgyzstan, this figure is more than 90 per cent, indicating the dependence of the economies of these countries on the availability and use of water resources. Therefore, any changes affecting water resources in Central Asia have a high multiplier effect on various socio-economic aspects of development in the countries of the region.

The situation is aggravated by the growth of water consumption, which is associated with population growth and intensive development of the region’s economy. The expected reduction in runoff in the medium to long term due to climate change makes this problem even more acute.

As a part of the UNDP GoAL-Waters (Governance, Accountability and Learning for Water Sustainability) programme supports equitable, efficient and environmentally sustainable use and protection of freshwater and marine resources. It helps identifying priorities and opportunities and addressing gaps and constraints in water and ocean governance by developing policy reform plans and action at international, national and local levels.

Building on UNDP’s close working relationship with country governments and partners, GoAL-Waters provides flexible support to national and local authorities and partners, supporting the 2030 Agenda with an emphasis on Sustainable Development Goals 6 to “Ensure availability and sustainable management of water and sanitation for all” and 14 to “Conserve and sustainably use the oceans, seas and marine resources for sustainable development.”

While support typically last some four years with a total budget of USD 200,000 – 400,000, it may be initiated through shorter interventions to support critical functions of a policy reform, or national-level consultation, analysis and action planning in relation to water/ocean-related SDG targets monitoring.[1]

The present Activity Proposal template provides the basis for discussion between the GoAL-Waters team at WGF and the UNDP Country Office, for subsequent approval by UNDP-BPPS for inclusion into the Global Water [and Ocean] Governance Support Programme.

In addition, UNDP, through its Green Accelerator Laboratory, promotes water and energy security at the regional level and in beneficiary countries.

Taking into account the special role of water resources in the sustainable development of sectors of the Central Asian economies, the Executive Board of the International Fund for Saving the Aral Sea in the Republic of Kazakhstan, together with the United Nations Development Programme in Kazakhstan, is organizing a Regional Central Asian Conference on 18-19 December 2019.

In addition, the International Conference of the Aral Sea Region countries will be held in April 2020. Both events address common issues of sustainability and climate change mitigation and will serve as an exchange of information and experience among specialists of the sector in order to create permanent regional networks. These activities are part of a broader UNDP effort to strengthen linkages and enhance the economic value of water, IWRM and energy resources in the region.

The Regional Central Asian conference on “innovative practices to address problems of the Aral Sea Basin in the face of Climate Change”will be conducted to ensure stocktaking of initiatives already happening in Central Asia and early lessons learned. This will be followed by exposure and exchange of practical modernization approaches. These are expected to become a foundation for the strengthening the regional and national water policies considering the IWRM principles, actualization of the country’s strategies in respective countries.

The conference will foster learning and partnership between the Central Asian regions by promoting international dialogue on organizations of the regional water partnership and help the participants deepen their knowledge, experience and understandings on advanced technologies, practices on application of diverse methodologies and techniques for sustainable land and water resources management in the Aral Sea bed and adjacent regions. This is an activity responding directly to the increasing problems and demand for improved regional management of Aral Sea Dried Bottom areas, enhance the water supply system following the priorities and highlights of the previous inter- state resolutions.

The conference is yet to promote targeted south-south peer-learning/share/exchange experience opportunity to support and build focused bilateral and multilateral cooperation water networks and practice communities.

The regional conference is also aimed to provide participants with “the necessary methods, approaches software and tools to understand, monitor and evaluate the water flow velocity and amount, improve a process of water supply system in the neighborhood regions of the Aral Sea, setting up water delivery plans and maps, data collection/analyses and delivery the appropriate and contemporary space remote technologies.

The conference program is developed as multidisciplinary and flexible, allowing participants to delve more deeply into issues of interest on technological ways for development Aral Sea bottom, organization of an intelligent monitoring and evaluation system at the near real or real bases and to proceed with factual data information about the current situation of Ara Sea River Basin.

Objective: Formation of a platform of project proposals for further investment and applied solutions to improve the welfare of the population of Central Asia through the development of regional dialogue, exchange of experience and study of modern methods, technologies and systems.

The Regional Conference will include the following areas of work:

Based on the results of the Regional Conference, it is expected:

[1] Whereas GoAL-Waters generally prefers a longer-term perspective and support over time, funding availability at present only allows for programming of 2019 activities.